Ford Performance Racing / Tickford Racing Magic Moments limited edition print range which has been designed to capture key moments and milestones across the history of the team. The 2013 chapter of The Great Race saw Ford Performance Racing finally climb onto the top step of the podium at Bathurst with Mark Winterbottom and Steven Richards at the helm of the #5 Pepsi Max backed Ford Falcon FG. They were strong all weekend and found themselves on the front row of the grid after finishing 2nd in the Top 10 Shootout. Despite a sluggish start which saw them drop down the order, the race was ultimately decided on the last lap with Winterbottom in a nail-biting fight with Holden rival Jamie Whincup. Whincup attempted a daring pass on the outside of Griffins Bend only for Winterbottom to hold on to create a gap that he then finely managed to the finish line to claim his first win at the mountain, and Richards’ third in a truly magical moment for the team. 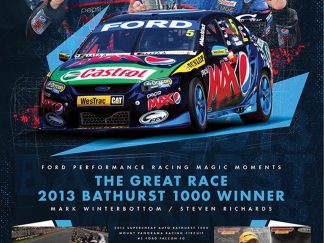