For the 1970 Bathurst race it was the first time drivers could nominate to drive the entire race distance without a co-driver. The number one driver was Allan Moffat who was to drive solo, as allowed by the new rules. Moffat was the fastest in qualifying with a lap time of 2m 49.3s – good enough for pole position for Sunday’s race. When the starter’s flag dropped, it was Allan Moffat in first position going up Mountain Straight. At the end of Conrod Straight, Colin Bond’s XU-1 Torana outbraked the GT-HO of Moffat and went into the lead. Moffat would regain the lead on lap five. After the first round of pit stops, Moffat was in the lead and by the second round of pit stops he was still leading. Nearing the end of the race, Bruce McPhee was closing in on Moffat who was slowing, but could only hope for second position. Moffat was to greet the chequered flag in first outright, after 130 laps, to become the first driver to win the event without a co-driver. 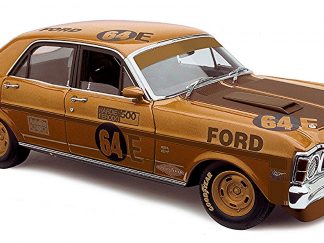