Acclaimed as Australia’s ultimate muscle car, the 1971 Ford XY Falcon Phase III GT-HO set a new standard in high performance on the road and race track. Legendary amongst the Ford faithful, the Phase III is also one of the rarest with only 300 ever built.

This GT-HO was a true supercar and with a top speed of over 140mph was the fastest four door sedan in the world at the time.

The new XY lacked none of the aggressive look people had come to expect. A functional, as well as decorative, air-cleaner assembly with a scoop protruding through a hole in the bonnet was standard. Ultimately this scoop assembly would become known as a ‘shaker’.

The XY was such a beautifully built car, with awesome power and handling. 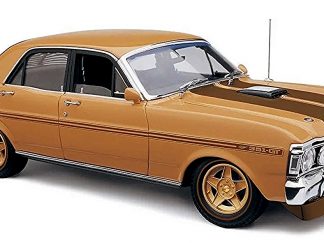