Jamie Whincup has become the second driver in V8 Supercar/Australia Touring Car history to win the coveted Championship in both a Holden and a Ford, taking the 2011 V8 Supercar Championship title ahead of teammate Craig Lowndes who gallantly fought to second in the final leg of the Sydney Telstra 500.

After 10 race wins, 9 pole positions and 19 podium finishes, Whincup has written himself into the history books with a third V8 Supercar Championship title, tying with Peter Brock and TeamVodafone teammate Lowndes.

After an incredible end to a dramatic season which has seen the TeamVodafone teammates trade the championship lead with only 35 points between the pair, Lowndes has recorded his seventh consecutive top four championship finish.

In what has been a stellar season for Lowndes, the three-time champion has enjoyed 5 pole positions, 5 race wins and 14 podium finishes.

With a total of 14 pole positions, 15 race wins and 33 podium finishes, TeamVodafone are unbeaten in their field, also now holding the record for having one of their drivers in the top-two of the Championship for the last seven seasons, a new record in V8 Supercar history. 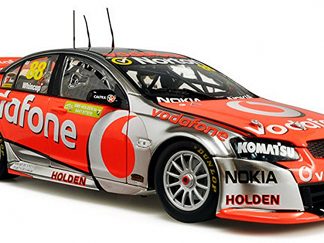