The 2015 season saw Team 18 running as part of the Walkinshaw Racing line-up where Lee Holdsworth cemented his popularity up and down pit lane by being voted the ‘Drivers Driver’ award. After Walkinshaw Racing decided to cut their team down from four cars to the two Holden Racing Team entries for the 2016 season, Holdsworth and team owner Charlie Schwerkolt were forced to find an alternative arrangement to ensure they would be on the grid in 2016.

With Walkinshaw Racing no longer an option, Schwerkolt took the opportunity to go out on his own for 2016 with the support of Preston Hire (and later announced, the 2017 season also). The season has proven to be a mixed bag for the developing team, with the biggest moment of the year unfortunately being a crash in Darwin which left Holdsworth with a fractured pelvis and an extended stint on the sidelines. Despite this setback, Holdsworth thankfully recovered and was back in time for the all important endurance rounds. 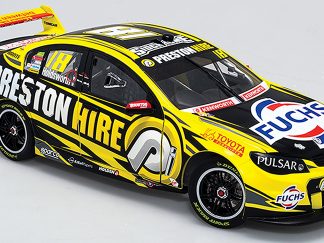