The 2015 Sandown 500 was held right in the midst of a very strong period on track for Prodrive Racing Australia, known now as Tickford Racing. Mark Winterbottom and Chaz Mostert were both in contention for the championship that year (which was ultimately won by Winterbottom) and their performances at Sandown with their co-drivers, Steve Owen, partnering Winterbottom and eventual Dunlop Super 2 Series Champion Cam Waters, partnering Mostert, were simply outstanding.

Both the Winterbottom/Owen and Mostert/Waters cars qualified strongly for the 500 to start from 2nd and 3rd on the grid respectively behind pole sitter Jamie Whincup and co-driver Paul Dumbrell. Come race day, the Red Bull Racing VF Commodore led for much of the day until a tyre puncture opened up the door for both PRA cars to claim the top two steps of the podium in a memorable 1-2 finish for the team. It was one of five 1-2 finishes the team enjoyed in 2015 highlighting their incredible success that year.

Both the winning #5 and runner-up #6 models will be produced in high quality sealed body die-cast with clear windows, detailed interior and will be presented in a clear acrylic display case featuring presentation finishing in an exclusive limited edition with an individually numbered base. 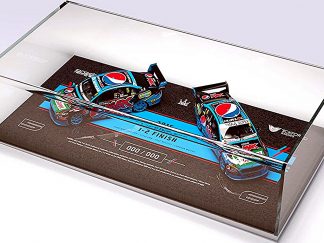