Tekno Autosports rolled up to the 2013 V8 Supercars Test day with a really unique white VIP Petfoods test livery featuring yellow and black paw prints across the car. The livery was on the car to be driven by new recruit Shane van Gisbergen who arrived at the team in somewhat controversial circumstances after ‘retiring’ from Supercars and previous team Stone Brothers Racing at the end of 2012 to eventually end up at the Queensland based Tekno for 2013.

The rare white based livery used at the test day as essentially a one-off would be updated to the season-proper black and yellow livery for the opening Clipsal 500 round (that van Gisbergen would win) and use for the rest of the year. It’s a unique one-off livery that we think should be in collections for fans of this team and talented driver. 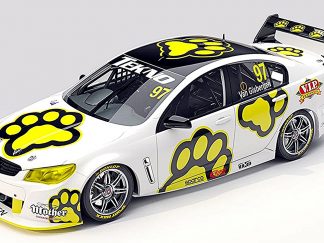