The 2018 Bathurst 1000 was the last time the iconic Ford Falcon nameplate would be raced in the Great Race at Mount Panorama and there was no shortage of tributes as the FGX prepared for the nameplate’s final bid for Bathurst 1000 glory.
Tickford Racing’s #56 RABBLE.club entry for Richie Stanaway and Steve Owen was one of the cars paying tribute.
Their striking blue Falcon bore the words “Falcon’s final flight, Mount Panorama” over a stylised version of the bird of prey, a feature of the team’s cars throughout its Ford Performance Racing era, a look many fans of the ‘blue oval’ loved over the years.
“It’s a small tribute to a car which obviously we have quite a history with,” team principal Tim Edwards said at the time.
“Every win we’ve ever had has, of course, been with the Falcon, so it’s a bittersweet farewell as we look to next year, but we’d definitely like to give it a proper send off in its last Bathurst 1000.”
Unfortunately the fairytale result wasn’t to be for the #56 Falcon but no-one can deny it was a fantastic tribute and will make yet another significant model for Tickford and Ford fans to have in their collections.
This model is scheduled to be produced in die-cast with opening parts in a limited edition with a numbered Certificate of Authenticity.
Code: ACD18F18M 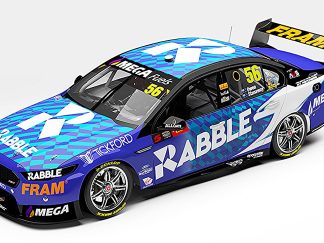