The #17 Shell Falcon had a retro twist added to its season livery for the running of the 2017 Sandown 500 Retro Round to celebrate a then 50-year partnership for Shell and team founder Dick Johnson.

The modern style Shell Pecten on the bonnet, doors and roof was replaced with a vintage style version of the famous logo along with special messaging on the rear of the car to commemorate the longest corporate partnership in Australian Motorsport after Shell first backed Johnson’s EH Holden in 1967.

It was a subtle retro addition to the car that fit perfectly with the season livery styling and proved to be a nice point of difference for the year. Not only did the real thing look great but it was fast too as it had been for much of the year, with the duo finishing on the podium in 2nd place to carry on what was a phenomenal first year with DJR Team Penske for McLaughlin.

This model will be produced in a limited edition with a numbered Certificate of Authenticity.

Pip
NZ
I have received the products (Mad Max models) today. I liked the products very much. Thank you for the careful packing and quick transaction.
Yukiya
Japan
I just wanted to let you know that I received Order #1687 for my 3- 1:43 car order and couldn’t be more pleased with both the cars and their boxes. Thank you very much. Have a g’day down under. 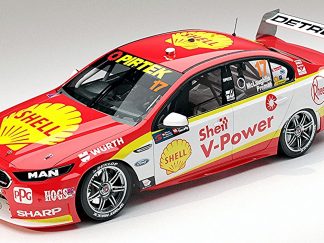