Despite being heavily disrupted in parts due to the global COVID-19 Pandemic, the 2020 Supercars Championship Season still managed to be run across 10 rounds and 27 races which was ultimately an incredible achievement for everyone involved in the series.
It was also the year which would prove to be Scott McLaughlin’s final season as a full time driver in Supercars after he opted to depart the category to race in the INDYCAR series in the United States of America in 2021.
This 2020 season car represents the Mustang McLaughlin drove during his final year as a full time driver in Supercars and will be modeled off the livery raced at the season opening Superloop Adelaide 500 which, ironically, would also prove to be the final time the hall of fame Adelaide street circuit event would feature on the Supercars calendar. McLaughlin finished 2nd in race 1 and 1st in race 2 at the event.
It was a phenomenal final year for McLaughlin which culminated in the young superstar securing his third consecutive Supercars Championship which is being modeled separately to this car.
This model will be produced with a sealed body die-cast in a limited edition presented in a clear display case. 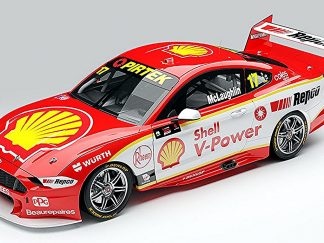