Following on from his maiden Championship win in 2018, McLaughlin was practically an unstoppable force in 2019 aboard a brand new Ford Mustang GT. He opened the 2019 season by giving the Mustang a win on debut in Adelaide and never looked back, breaking numerous records including the most race wins in a single season and a Bathurst 1000 victory along the way.

Officially licensed, this is a must have collectors print for Scott McLaughlin and Shell V-Power Racing Team fans. 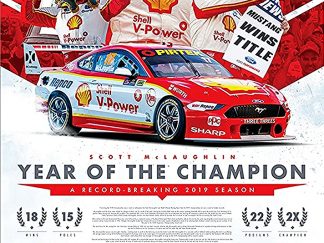