Authentic Collectables are very proud to be releasing a new limited edition print which celebrates yet another significant milestone in 2019 for Scott McLaughlin and the Shell V-Power Racing Team.

At his home round, the ITM Auckland SuperSprint, Scott McLaughlin scored his 17th and record breaking win of the 2019 Virgin Australia Supercars Championship season which fittingly occurred in his milestone 100th Championship round start. The win broke the record of 16 wins in a season set 23 years prior by Craig Lowndes in 1996 – a record many thought to be unbreakable.

The victory saw McLaughlin break not only the Lowndes record, but also a long-held Team Penske record. The legendary Mark Donohue won 16 races for Team Penske across the 1968 season, which McLaughlin has now eclipsed to create the most-successful season for a Penske driver in the team’s 52-year history.

Now officially taking the title of the most dominant Supercars season to date by any driver, McLaughlin was delighted to break the record at his home event;

“I am so stoked to get that done on home soil. We made the car so much better today, my team is just incredible and I am so fortunate to drive for them. Wow. Breaking that Lowndes record is very special, but doing it here in New Zealand makes it even more special. Thank so much to all of the amazing fans out here today, I’m so proud to have gotten it done today.”

Featuring the artwork of Australian designer / illustrator Tristan Groves, the print measures 594mm X 841mm printed on 250gsm matte paper using offset print technology in a limited edition run and will be individually numbered and signed by the artist. This edition features a Pantone gold metallic ink used in the background to give this print an extra special finish.

This is another amazing collector’s print for Scott McLaughlin and DJR Team Penske fans. 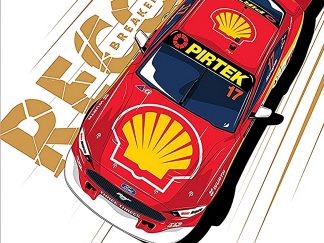