Limited edition print of the Nissan Bluebird Turbo driven by George Fury to claim pole position at the 1984 James Hardie 1000.

A two-time Australian Rally Champion and runner-up in the Australian Touring Car Championship, George Fury was a champion talent behind the wheel and his pole lap at Bathurst in 1984 against a who’s-who of names is a perfect example of his racing pedigree.

The list of drivers and cars that were present in the 1984 Hardie Heroes shootout featured some of the most iconic names ever witnessed across the history of Bathurst. Household names such as Brock, Johnson, Moffat, Richards, Grice, Morris, Masterton, Hansford and Walkinshaw were all present piloting legendary machinery from Holden, Ford, Mazda, BMW and Jaguar trying to record the fastest time around the mountain to claim the honour of starting on pole for Australia’s Great Race.

Despite all their mouth-watering credentials though, none were ultimately able to better Fury’s blistering pole time of 2:13.850, with the cold conditions and his immense talent behind the wheel helping the Turbo Nissan to the top of the timesheets. It was the first ever Bathurst 1000 pole position by a car fitted with a turbocharger and it was a pole lap time that would not be beaten until 1991.

Given it was the last year of Group C regulations, Fury’s time remains the fastest ever at Mt Panorama by a Group C touring car making this a truly unique and historically significant car in Bathurst 1000 history. 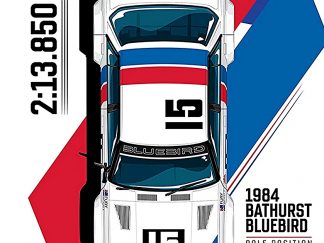