The Wheels Car of the Year for 1988 saw the VN Commodore break into new territory for Holden. It brought back the larger size clearly demanded for Australia’s favourite car, but also retained excellent performance from the-then-new American sourced Buick 3.8 litre V6. On top of this, it also did it all at a very reasonable price point for the recession bound late 80’s and early 90’s.
Clearly though, Holden wasn’t resting on their laurels after the VN burst onto the scene and made such an impact in 1988. The first iteration of the second-generation Commodore was also the first Commodore model to feature a utility fully integrated into the line-up – The VG ute. Together with the Executive, S, Berlina, Calais, and longer wheelbase Statesman and Caprice VQ’s, it provided the general public with a stunning new range to pick from.
March 1989, however, saw the most exciting model announcement of the lot – the incredibly tough SS, a bang-for-your-buck V8 brute that redefined Holden’s V8 performance. Ushering in an entirely new 165kw electronic fuel injected (EFI) version of the much-loved Aussie V8, the SS blew everything else into the weeds for the day.
The EFI system wasn’t the only feature the SS boasted. It also included new cylinder heads, new higher performance tyres and brakes, limited slip differential, unique sports cloth trim, four-spoke steering wheel, and integrated fog lights that were built into the new aggressive body kit.
Initially available in only Phoenix Red and Atlas Grey with an eye-catching SS decal and stripe kit, it was a combination that turned heads everywhere, and still does to this very day.
Authentic Collectables are extremely excited to announce the VN SS Commodore in iconic Atlas Grey. Without doubt, one of the most requested models that collectors have been waiting very patiently for.
Replicating the original base level Series 1 version featuring a manual gearbox, this model is scheduled to be produced in die-cast with fully opening parts and high detail designed directly from genuine 3D scanned data. As with all our releases in 1:18, this model will be produced in an exclusive limited edition with an individually numbered Certificate of Authenticity. 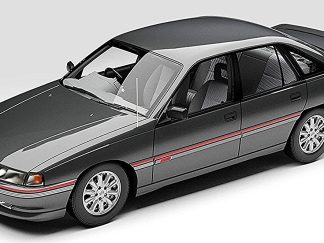