After a ten year absence from the popular Ford team, Jason Bright returned to Prodrive Racing (now known as Tickford Racing) to contest the 2017 Virgin Australia Supercars Championship racing the #56 Mega Fuels backed Ford FGX Falcon.
Featuring an easy-on-the-eye white blue and purple livery at the season opening Clipsal 500, Bright’s new Falcon challenger certainly looked like a very nice race car before undergoing a livery upgrade later in the season.
Bright’s 2017 season would ultimately be his last full time season competing in the Supercars Championship, bringing an end to a long and successful full time career in the sport which included the 1998 Bathurst 1000 win and 20 race victories.
This model is scheduled to be produced in sealed body die-cast with clear windows, detailed interior and will be presented in a clear acrylic display case with a numbered backing board which acts as the Certificate of Authenticity. 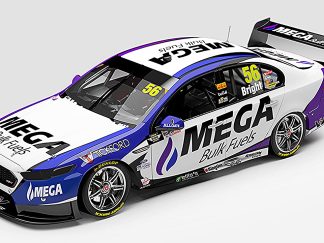