The 2020 season was Le Brocq’s first season with Tickford Racing driving the #55 Supercheap Auto Mustang. The unusual year, which was impacted by the global COVID-19 Pandemic, saw Tickford Racing as one of the Melbourne based teams who were forced to clear out of the state with around 24 hours notice and be on the road for over 100 days in order for the Championship to continue – a massive effort and commitment which didn’t go un-noticed by fans of the sport.
A first season with a new team, in a new car is always a tough prospect and combined with all the other hurdles that 2020 presented, Le Brocq was always up against it in 2020. Despite all of this, Le Brocq still managed to claim his maiden Supercars Championship win in Race 12 at Sydney Motorsport Park.
Le Brocq was understandably overwhelmed in claiming his first win in the category; “I’m at a loss for words. Man, those last few laps were tough, I was just hanging on, trying to stay smooth, not slide the car too much, and just look after the tyres. I had a moment with, like, three laps to go and thought I was in trouble, but gathered it up and brought it home. Massive thanks to everyone at Tickford and Supercheap Auto Racing who made this happen. We swallowed a couple tough results in the first two races to have a proper go at the last race, and it paid off. Absolutely stoked.”
Produced in die-cast with fully opening parts in a limited edition with a numbered Certificate of Authenticity. 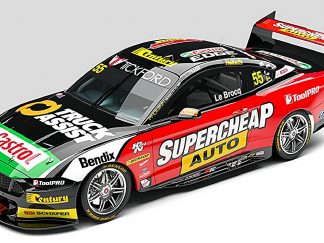