Commemorate the return of the legendary Ford Mustang GT to racing in Australia with this impressive limited edition print featuring the #17 Ford Mustang GT driven by Australian racing icon Dick Johnson in the Ford Performance ‘Parade of Champions’ at the 2019 Superloop Adelaide 500.

The drive by Johnson marks the very first race-event laps of the new-for-2019 race car.

“When I was approached with the concept, the first question I asked was ‘what’s the lap record?’. But seriously, it’s been a long time since I’ve been behind the wheel of a full-spec Supercar, and to get the chance to drive the new Mustang is something I’m very much looking forward to,” said Johnson.

“Scott and Fabian have been saying plenty of great things about the new car, so it’s going to be an honour and a privilege to once again hit the track in Adelaide, for the first time in nearly twenty years. Doing it alongside Marcos and Scott is just the icing on the cake.”

This is another beautiful collector’s print for Dick Johnson and Ford fans alike.

Note: Concept artwork pictured, may be subject to slight change. 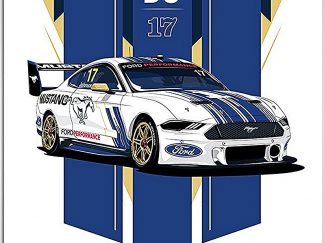