The 2017 Supercars Championship Season was David Reynolds’ 2nd year with Erebus Motorsport and he was granted a new chassis for the year – the first time he had been given a new chassis in his Supercars career. The predominantly black Penrite backed Commodore looked spectacular and the base livery remained largely unchanged for the majority of the season until the endurance rounds where a white retro livery and the now iconic Australian themed Bathurst 1000 winning livery replaced it only to change back to the regular season colours for the last races of the year. The Bathurst win is the obvious 2017 highlight for Reynolds and the team but the season was reasonable for the #9 Commodore, finishing in the top 10 on 16 different occasions along with a couple of podiums to ultimately finish in 7th place for the year in the driver’s standings.

Produced as a sealed body with clear windows and detailed interior in a limited edition with a numbered Certificate of Authenticity.

Colin
UK
I have received the products (Mad Max models) today. I liked the products very much. Thank you for the careful packing and quick transaction.
Yukiya
Japan
I just wanted to let you know that I received Order #1687 for my 3- 1:43 car order and couldn’t be more pleased with both the cars and their boxes. Thank you very much. Have a g’day down under. 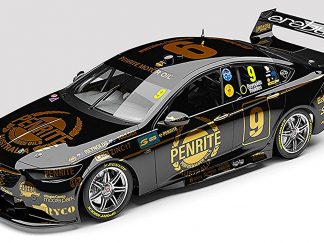