The 1993 Bathurst 1000 saw almost half the field, 22 out of 45 starters, fail to complete the race due to some of the wettest conditions ever seen at the Mount Panorama Circuit. It quickly turned into a race between the Commodores of Larry Perkins/Gregg Hansford and Mark Skaife/Jim Richards.

Never had the two crews at the head of the race been so closely matched. It was exciting, Handsford holding his never against Richards to keep car 11 in the lead to the pit stop on lap 130 where Perkins re-entered the race to carry on the battle.

Richards pitted on lap 147, he rushed back out buy the task seemed hopeless, only a slip by Perkins would offer him a chance, but it never came. It was a classic contest that lasted all day and ended with Perkins/Hansford taking the flag 10.54s in front of Skaife/Richards in one of the best races seen on The Mountain. 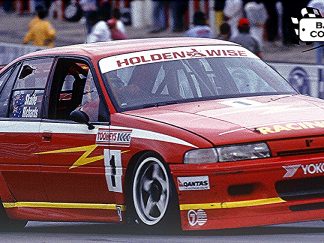