Now a veteran of the Supercars Championship, 2-time Bathurst 1000 Winner Will Davison scored the coveted #17 drive with the re-born Dick Johnson Racing / Shell V-Power Racing Team for the 2021 season after the departure of 3-time champion Scott McLaughlin.
It was a fairytale return to a full time drive for Davison who experienced a well documented rollercoaster year in 2020, no less to a team he previously raced for over 10 years prior.
As if things haven’t been mixed up enough in recent memory, the start of the 2021 Repco Supercars Championship saw another really big change and was held at Bathurst in February as the Mount Panorama 500. Davison started the season off in style at the mountain with a podium finish for Race 1 which is the livery we are basing this season model on.
While he has had to contend with the absolutely enormous shoes he had to fill, Davison has applied himself admirably so far over the course of the 2021 season racking up multiple podiums and poles, with a win surely on the cards. He has been a classy, steady hand for the team, forming a very strong partnership with new team mate Anton De Pasquale.
Produced in die-cast with fully opening parts in a limited edition with a numbered Certificate of Authenticity. 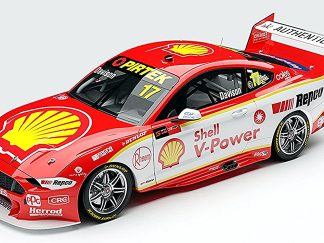