2018 was a difficult year for Coulthard, driving the ageing FGX Falcon, but there was light at the end of the tunnel in the form of the teams new Mustang GT Supercar.

More in tune with the fast Kiwi’s driving style, Coulthard instantly made his mark scoring pole position for the first race of the year in Adelaide and sitting comfortably in second place in the championship for the majority of the first half of the season, behind his dominant Shell V-Power Racing Team teammate.

Don’t miss Coulthard’s 2019 season car in 1:18 scale which is scheduled to be produced by Authentic Collectables in high quality die-cast with detailed interior and fully opening parts. This model will be produced in a limited edition with a numbered Certificate of Authenticity. 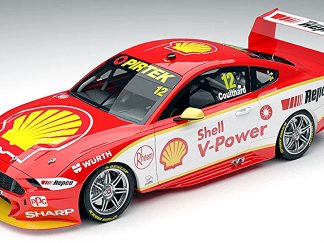